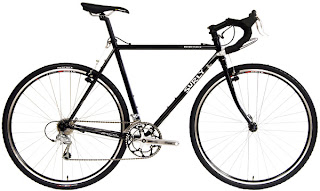 Ever since I donated the GT Karakoram to BB’s church project, I’ve missed having an ‘urban assault vehicle’.

I’ve been eyeballing various ‘cross bikes, and finally found a deal on a Surly Cross Check. After waffling on the purchase for a couple of weeks, I finally decided to pull the trigger.

The bike arrived on Monday, while Weazer was at home for lunch (lucky me!). I put it together last night, but did not get a chance to test ride the bike.

Today I threw on a tail-light, strung up the old halogen Jet Lites and headed out to the YMCA for swimming. I ended up having to make TWO round trips to the pool (w/out ever getting in the water — don’t ask). I think that I’m really going to like this bike. It’s plush, with the fat tires and steel frame, handles well, but not twitchy. It’s not light, but not all that heavy, even after hanging the seat bag, battery, lights and full water bottle. The ‘Cross gearing makes it pretty easy to pedal, and once up to speed, it cruises nicely.

I’m going to have to get used to bar-con shifters again. It’s been a LONG time since I’ve used them. If I really hate them, I’ll swap them out for the old 105-STI from the Cannondale.

I’ve got a new seat and some fenders on order. The old Trek rack doesn’t fit this frame, so I’m going to have to replace it, but I should be able to salvage the panniers. My goal is to bike-commute 2-3 days a week.

It’s not easy being green!